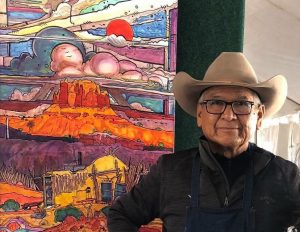 Baje has been a Working Artist for over 40 years. During that span he has served as a Cultural & Art Consultant and has significant accomplishments in assisting and mentoring in the Native American community in art and in small business development. He has exhibited at schools, in communities, at prestigious museums across the USA and in Art Centers around the world. He has worked with the Navajo Nation Office of Tourism and Arizona State Office of Tourism developing tribal tourism and promoting the understanding of tourism for economic development on tribal lands.

Baje is the author of two children’s books and illustrator of 9 children’s picture books. He was the recipient of the Western Heritage Wrangler Award for Best Juvenile Book from the Cowboy Hall of Fame Museum in Oklahoma City.

He has worked with the Art in Schools program, literature, Navajo culture, language and numerous mural projects with students in the Four Corners region of the western United States.

He served as Vice President and President for the American Indian & Cowboy Artists Association. As their President, he initiated the beginnings of the Masters of America West Exhibition at the Autry Museum in Los Angeles, California.

He directed the creation and installation of 10 culturally significant wall murals for the Navajo Nation at the Twin Arrows Hotel & Casino.

Baje served as President & Chairperson of the Shonto Economic Development Corporation for 5 years where he guided the construction contracting, finance, and Community Development for the Shonto Marketplace.

He is the 2018 recipient of the prestigious American Indian Excellence in Leadership Award from the Phoenix Indian Center. This recognition celebrates individuals and organizations in Arizona who have demonstrated outstanding leadership and commitment to the advancement, promotion, and development of the cultural, educational, social, economic, or political welfare of the American Indian community or have provided significant contribution to the American Indian economy.

He was most recently honored by the Heard Museum as the recipient of the 2019 Spirit of the Heard Award for his work as founder of Art of the People, an affiliation of premiere Native American artists who encourage a new generation of artists to a renewal of the tradition of excellence, activating, preserving and invigorating our Native American culture.