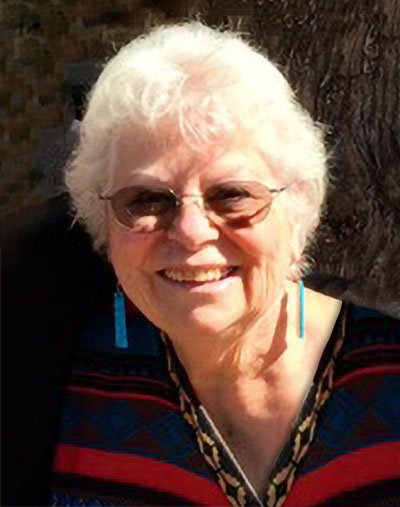 Martha Blue’s careers as a lawyer, writer and artist reflect her decades of living, schooling (Prescott High School and University of Arizona graduate), and working in Arizona and its Indian country. She put herself through college and law school.  In 1967, she and her late former husband, Roy Ward, became early lawyers in the fledging DNA Peoples Legal Services Inc. (Dinebeiina Be Agaditahe, Inc.) for Navajo, Hopis, and Paiutes in Western Navajo. There she instituted an Indian welfare law reform unit. Then she spent a year lawyering in the new Micronesian Legal Aid Service on Ponape in the Eastern Caroline Islands.

In 1973, she started a private practice in Tuba City and in the border town of Flagstaff, Arizona, specializing in Indian law. She was general counsel for the Havasupai, the People of the Blue-Green Waters, for nearly two decades. In addition, as a writer herself, she represented writers, authors, and small presses.

She has served as Chair of the Arizona State Bar’s Art Law Committee; Regional Director of Books for Kids and in 1990 distributed 100,000 books for children in Reservation schools to take home (she received the Parnassus Award for this volunteer work); founder and officer of the Friends of Hubbell Trading Post National Historic Site; and a board member of the Museum of Northern Arizona, Friends of the Flagstaff Public Library, NACA (Native Americans for Community Action) as well as other public service organizations.

In 2000, she was chosen as one of 100 women and minority lawyers who contributed to Arizona’s legal history. When the Center for the Colorado Plateau Studies NAU existed, she was a research associate.  Her book publications include a NARF, Native American Rights Fund, text on Indian welfare (co-author). She contributed to a law review article on the same subject; McGraw Hill and Northland Publishing published her self help lay person books, MAKING IT LEGAL and BY THE BOOK; the Museum of Northern Arizona’s Plateau journal on trading posts included her piece “A View from the Bullpen: A Navajo Ken of Traders and Trading Posts“; Dine College Press published twice a paper she gave at a Navajo Studies Conference, i.e. THE WITCHPURGE OF 1878; in 2000  Kiva Publishing released THE LIFE AND TIMES OF J. L. HUBBELL, an ethnobiography of an Indian Trader which book received several awards; and Salina Bookshelf published an illustrated bilingual story of a young Navajo girl who wanted to learn to weave, i.e. LITTLE PRANKSTER GIRL. Plus, she’s authored dozens of articles in periodicals ranging from as New Mexico Magazine to Southwest Art. In writing an article for Southwest Art on Baje Whitethorne, Sr. in the 1980s, she met Baje Jr., Buddy, when he was a youngster,  when he helped his dad teach an art class she took from Baje Sr., and then often when Buddy was at Salina Bookshelf during the publishing process of LITTLE PRANKSTER GIRL.

While working in Indian country, she was introduced to weaving, as well as carding and wool dying. This morphed into painting and monoprinting. She’s been in several group art shows in Northern Arizona and has won awards for her weaving and art.

Martha lives in a passive solar home in Flagstaff that her late husband, Oliver W. Johnson—a  NAU biologist, designed and built himself with NAU students assistance. She has one daughter, Zoe Lonetti, who lives in Flagstaff as well.